Admission: when I launched this website almost exactly a year ago, I was so nervous.

I had worked so many hours on this site. I’d spent Friday nights and Saturday afternoons at Starbucks, writing and re-writing the content of every page, sometimes walking to my car with effectively a paragraph of text after 4 hours of work. I knew the road was long but not insurmountable. I knew that God gave me the abilities to finish the content and technical details to push the site live. Much like my time in the hospital, my time creating Cheekswab was slow, and taken a day at a time. And in faith that one day those steps would not be in vain.

I remember putting the link to cheekswab on Facebook. That’s when the nerves were strongest. Would anyone care? Would anyone help, would anyone join? Were the hours and effort I put into this site all in vain? I had so many doubts. But I wrote the status and pasted the link. I took a deep breath and clicked “share.”

The support from friends and family was overwhelming.

The link was re-shared over and over (and over) again. Visitors begin to hit the site from around the world. I received emails and messages from people to lend their encouragement and support for the cause. And even greater than that, people joined the registry.

It was such an amazing day to be alive.

I made a promise on my hospital bed. But it wasn’t just to myself; it was also to my nurses, my doctors, my family, my friends, everyone else I saw who was touched by this disease, and to God.

It was the acceptance of the burden of knowing the reality of cancer. It was the promise that because I now knew what it was like, I would never forget it. I would never turn a blind eye or a callous disregard to those who stood in my shoes. If I could do something about it, in my limited capacity as a non-medical professional, I would.

I did a lot of things this year through Cheekswab that I never expected to do. I spoke publicly to more people than I ever expected for anywhere from 5-45 minutes at a time. I manned booths at conventions and shows. I put my face and my story out there for the scrutiny of others. I invested time and money into something I really believed in. I coordinated drive supplies, volunteers, and venues.

I became invested in the lives of people whom I’d never met from across the Internet. I watched people I care for pass away, and their friends and family members cope with the loss. I watched people I care for survive, with a newly appreciated love and vigor for life. I met people who donated marrow graciously to people they didn’t know, solely because “it was the right thing to do.” I met other fighters for the cause and heard their own inspirational stories, whether it was their own medical history, the death of a loved one or conviction placed within them by a friend.

18 months ago Cheekswab was nothing but a dream. An idea I’d mention randomly to close friends and family, just to see if they’d give me a good reason not to follow through. It was one of those “wouldn’t it be nice” ideas, more idealistic fantasy than concrete plan. I didn’t know where to start. I didn’t feel qualified, I didn’t think I had the necessary skills or personality.

Even after a year things are still very much a work in progress. But luckily since day one I haven’t walked this path alone. There’s been an incredible system of support, including BeTheMatch regional coordinator Juliette Williams, other contacts from Be The Match, and a tireless group of friends and supporters who are willing to help me staff drives/complete kits.

Cheekswab has been a dream come true for me, and to everyone who has been involved in any way, shape or form, I thank you.

For the past several months I’ve been working on a new section of the site entitled Donation Stories. The purpose of this section is to chronicle the stories of people who have donated marrow in an honest and personal way. I’ve done my best to provide comprehensive information about bone marrow donation on this site — the methods, the logistics and time commitment, and addressing some common questions — but something was missing.

Since I’m unable to personally join the registry for medical reasons, I’ll never know what it’s like mentally and emotionally to go through the process of donating marrow. I can write about the parameters of the time commitment but I don’t know what it’s actually like to sacrifice the time for checkups and blood tests. Up until now, the emotional and mental perspective is what this site has lacked. The Donation Stories section hopes to address that need.

I’ve written about Dennis previously in this blog and the fact that he was asked to donate to an anonymous patient in early December. What you didn’t know END_OF_DOCUMENT_TOKEN_TO_BE_REPLACED

This Tuesday, on Valentines Day, join schools throughout the DC/VA/MD area in helping to save Janet Liang’s life. (Graphic updated!) 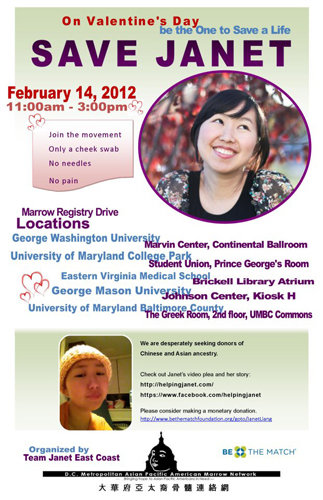 Please spread the news on your college campuses!

It costs the NMDP $100 to process and register a single donor through drives like these. Please consider a financial donation of any size to help offset the costs of donor registration and help save the lives of Janet and people in similar circumstances. 100% of donations will go towards registration costs only. Read why this is important here.

So I just put the first public promotion of cheekswab on Facebook, and the response from friends has been overwhelming. To all of those who have re-shared, linked, re-tweeted and redirected others to this site, I thank you. Spreading awareness about the issue is the first step in changing lives.

There are those people out there, especially in the social media landscape, that are fantastic at self-promotion. Youtube channels, Facebook pages, twitter replies, etc. Unfortunately, given my personality type, I am decidedly not one of those people. But I do see the value in social media, and I think there’s a delicate balance between using social media in an unobtrusive yet informative/engaging manner and the world of twitter-bots and Farmville updates. It’ll be a work in progress, but I look forward to figuring out how to use social media in the most effective manner possible. Please let me know if cheekswab ever gets to the point where it begins to disrupt that balance.

For those of you coming to this site for the first time, I encourage you to do something along the lines of the following:

Thanks again for visiting. Please use the contact page to get in touch with me for any reason.