I’ve been in contact with Shannon, a friend of Janet Liang who recently moved to the DC area to practice as a lawyer. To honor Janet’s memory and to help find a match for Jeremy Kong in CA, Shannon is helping to coordinate a bone marrow drive at the 24th Annual NAPABA Convention in Washington DC. I’ll be at the convention all day at the BeTheMatch registration table with Shannon, her husband, and representatives from BeTheMatch. 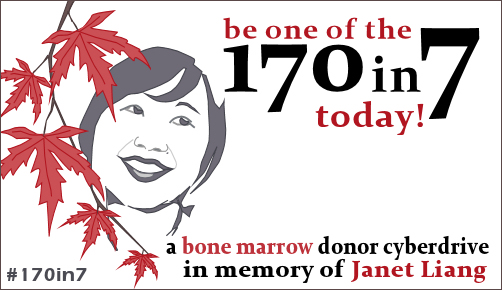 Janet made it her mission to register Asian American bone marrow donors, and thanks in part to her efforts, at least 18 bone marrow matches were made to recipients nationwide. However, last week, Janet passed away without finding a perfect match for herself. Today, many other Asian American leukemia patients are still waiting to find their perfect match, like 2-year-old Jeremy who was recently diagnosed with leukemia. To celebrate Janet’s life and her legacy, we want to register 170 new potential bone marrow donors in Janet’s name in just 7 days.

I’ve put off posting my thoughts on her passing until now because I wasn’t sure what my thoughts were. But with this new cyber initiative adopted by several leaders in the Asian American online community to register donors this week in Janet’s honor, I think it’s an appropriate time to share about Janet’s impact on my life and on Cheekswab.

I didn’t personally know Janet, but our paths crossed a little. I heard her voice on a White House conference call and she heard mine. I sent her a message on Facebook that understandably never got a response. I commented from time to time on her Facebook status updates. She liked Cheekswab on her Facebook account.

For someone I’ve never met, Janet had a very strong impact on significant aspects of my life. The launch of Janet’s viral video on reddit coincided with the launch of Cheekswab, and I received emails from people wanting to donate because of Janet’s plea. I ran two drives in Janet’s honor earlier this year, as people who saw her video became convicted to give part of themselves in hopes of saving her.

She struck a chord in the consciousness of thousands of people across the Internet. She advocated for a cause more personally and successfully than anyone who came before her. Team Janet registered over 10,000+ new donors from high-need ethnic groups in this year alone. She will save hundreds, potentially thousands of lives through those registrations.

She just couldn’t save her own.

When I speak at drives, I use the line that “Janet is you, Janet is me, Janet is your best friend, daughter, child, parent, spouse.” But Janet was literally me. She was a 25 year old Asian American leukemia patient. She wanted to positively impact the world by being a teacher. She was deep and reflective and eloquent, per her blog. She was confused and angry but ultimately optimistic. 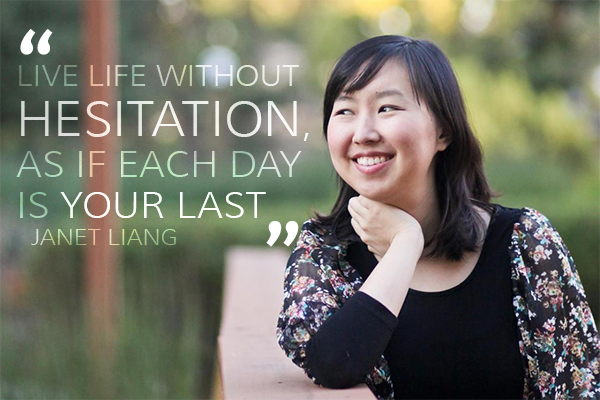 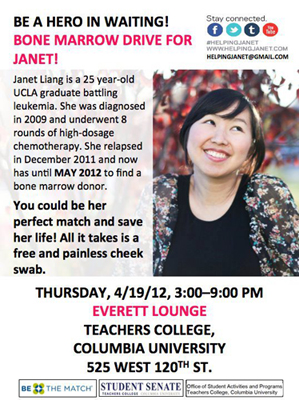 Just a quick drive announcement for any folks in New York City!

Janet Liang is still searching for a donor match in the bone marrow registry! Despite the fact that her initiative has helped to register over 13,000 people and resulted in marrow matches for several others, Janet herself still needs a donor. You could be the one to save her life. If you’re in New York City, please consider visiting Teachers College at Columbia University THIS THURSDAY to see if you’re a match!

Remember that all the information you need with regards to the need, the process and frequently asked questions can be found throughout this site. Get informed, get convicted, and get registered!

Last Thursday I was able to listen in on a conference call hosted by the Whitehouse Initiative on Asian Americans and Pacific Islanders as representatives from both government agencies and grassroots organizations shared their experiences in spreading awareness for bone marrow donation. The speakers on the call all brought an enormous amount of experience and knowledge to the discussion. They included representatives from:

END_OF_DOCUMENT_TOKEN_TO_BE_REPLACED

With bone marrow drives at ODPC (Sunday), GMU (Thursday), and Chesterbrook Taiwanese Presbyterian Church (CTPC) on Friday and Sunday, this past week was pretty busy. But with the help of the GMU Vietnamese Student Association, the staff and members of CTPC and friends who volunteered at each of the drives, 79 new donors were registered this week in honor of Janet Liang. By adding CTPC to the Team Janet East Coast drives from UMCP, UMBC, GWU, EVMS and GMU, that brings the total new East Coast registrants for Janet Liang to 347 people!

I want to give a special shout out to Vinh Phan, a GMU student who really went above and beyond the call of duty to make the GMU drive a success. We had originally planned to host a drive at GMU as part of the multi-school Team Janet East Coast initiative on Valentines Day (which registered donors from UMCP, UMBC, GWU and EVMS) but unfortunately END_OF_DOCUMENT_TOKEN_TO_BE_REPLACED