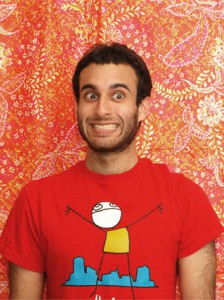 Amit Gupta is a silicon valley/tech entrepreneur who has been in tech news a lot recently because he needs a bone marrow transplant.  He was diagnosed with AML, and there’s a very active search for a donor.  See his website here: http://amitguptaneedsyou.com/

One of my favorite tech websites/news aggregators, Hacker News, has had news about Amit on-and-off for the last couple weeks.  When I opened the most recent post I saw this comment at the top:

The concept of donating bone marrow terrifies me. I imagine a doctor drilling into my skeleton and using a large needle to suck out the gooey stuff that makes my blood. It sounds absolutely horrific.

If I were ever to consider doing this, someone would have to educate me to the point where my perceived safety is high. Right now I know that this probably won’t kill me, but I don’t understand it enough to trust it. I imagine that I am not the only person in this situation.

I also felt terrible writing this. My fear is absolutely petty compared to the fear of being struck down by leukemia. Perhaps that’s why I felt obligated to share.

I appreciate HN not only because I’m interested in technology, but also because the level of discourse there is generally very intelligent.  There are a lot of very well educated and accomplished people adding their insightful commentary to an array of topics.  This comment, in particular, addresses an issue I find of utmost importance: the fear of the general public.  I’ve said it before and I’ll say it again, I’m still convinced the number one inhibitor to more people being on the registry is not apathy, but a lack of awareness.

This person’s comment shows empathy and a willingness to help, but it also shows a very human skepticism created by natural ideas of self-preservation and a lack of information.  When people contribute to something, especially with their health, they want to know all the facts.  There is a massive disconnect happening between the facts and people.

I love the fact that this was the top comment in the thread because that means that most of the people who read this thread voted it up in the rankings.  This was an accurate reflection of what most people were wondering but may have been hesitant to say/admit.  This type of pure, unadulterated insight is what will lead to change.  It will identify problems.  It will lead to better awareness campaigns, and ultimately save more lives.

I’ve been a long time lurker/admirer of HN until now, but today I knew I had to make a post to reply to this comment.  Here it is:

I’m an Acute Mylogenous Leukemia (AML) survivor and a Level 2 ambassador with the National Marrow Donor Program. I’d like to thank you for your honesty, as a lack of awareness (and the resulting fear) is one of the biggest obstacles the NMDP faces when trying to recruit donors. Your perspective really is something that I think a lot of people feel but don’t necessarily share, and I commend you for having the courage to do so. It’s a step in the right direction for finding the right means of educating the public.

I’ll try to respond to some of your questions as best I can, but please keep in mind that I am not a doctor and while I have received volunteer training from the NMDP, any thoughts expressed in this post are my own.

What happened with me (and likely with Amit) is that at some point a mutation occurred within my bone marrow so it began generating malformed white blood cells. Instead of behaving like a normal immune system these mutated cells did nothing but fill up my blood stream, inhibiting the growth and transport of normal white blood cells and platelets. As a result I began to get progressively sicker, with bruising appearing over my body. As you can imagine this situation gets very dangerous very quickly, as doctors told me that if I hadn’t gone into the ER when I did I ran the risk of bleeding in my brain while walking to class.

Chemotherapy was used to effectively kill off all aspects of my blood — white blood cells, red blood cells, platelets included. The hope here was for chemo to wipe out as much as it could in hopes of eliminating all traces of cancer in my bone marrow. Due to the human body’s natural resiliency, after chemo eventually the bone marrow would start to regenerate. The hope was that after this regeneration happened no cancer cells would be reproduced.

For me, it was a waiting game: undergo chemo, wait to see if cancer reappeared. I did this six times (2 inductive rounds, 4 consolidation rounds). Thankfully after those first two rounds I was in the clear. I’ve been in remission for a little over four years now, and I still go into the doctor for regular blood tests.

While I’m not exactly sure of the medical reasons why bone marrow transplants are needed, I do know that a very simplistic view of them is that they’re necessary when chemotherapy is not enough. Whether it’s because the chemotherapy is ineffective or specific DNA markers or whatever, there are times when the body’s natural bone marrow is no longer effective in producing normal blood cells. It’s a dangerous procedure for the recipient (because of the possibility of the body rejecting the transplant) but it’s not considered in circumstances where other viable alternatives exist. It really is something of a last resort.

For donors, joining the registry is painless and extremely simple. The NMDP asks you to check against a preliminary health screening (http://www.marrow.org/Join/Medical_Guidelines/Medical_Guidel…), understand the commitment (http://marrow.org/Join/Your_Commitment.aspx), and fill out a form with some medical/contact information to make sure that you can be contacted in the event of a match. I read a statistic that less than 50% of those currently within the registry (1) can be contacted successfully and (2) are willing to donate once a match is found. (http://www.ij.org/about/2903) The form asks for your contact information and the contact information of two others who do not live with you, just in case you happen to move elsewhere at a later date. The NMDP takes privacy very seriously, and will not solicit you or others with the contact information you provide.

The form comes with a swab kit consisting of four cotton swabs. These swabs are processed by the NMDP to match donors and recipients by specific DNA markers. To register, you simply swab the inside of your cheek with each swab, for 20 seconds each. Put the swabs back into the kit and then they’re sent off for processing. That’s it; a form and four cheek swabs.

Given the specific DNA markers used to match donors and recipients, realistically the chances are that you will never be called to donate marrow. According to the FAQ here (http://amitguptaneedsyou.tumblr.com/faq), the NMDP puts the odds at 1 in 540.

If you do one day receive a call to be a donor, there are currently two main methods of bone marrow donation. The first, Peripheral Blood Stem Cell (PBSC) donation, is used in over 70% of cases and is described in detail here: http://www.marrow.org/Registry_Members/Donation/Steps_of_Don…. Another good reference is this site: http://helpingtami.org/asian_bone_marrow_and_pbsc.html, which despite the cartoonish graphics, serves as a pretty accurate representation of what PBSC entails. You get a shot for a few days that kicks up your normal bodily process of bone marrow production into overdrive, to the point where bone marrow cells enter your bloodstream. You donate blood, after which bone marrow cells are irradiated out. The blood is then put back into your body. I’ve personally received the shot (called Neupogen) that is used to kick up your bone marrow production over 30 times, as it was used following each of my rounds of chemo. A common side effect of the drug is that it makes you a bit achy and sore, as if you had gone on a long hike the day before. I did not feel any significant discomfort on neupogen to the point where I couldn’t go about my day as normal.

The other procedure is extracting bone marrow from your hip bone, which is performed under general anaesthetic. It is also depicted on the helpingtami.org link above. 30% of bone marrow donations are performed this way, and I believe it’s usually due to restrictions of the recipient. Receiving a bone marrow transplant can be extremely taxing on the human body, and if a patient is too young or old for PBSC a bone marrow extraction is requested in its place. Admittedly this process is more invasive, and as a result donors are put to sleep. Doctors use special, hollow needles to extract little bits of bone marrow from your hip, and because the needles are small it does require a lot of sticks to collect enough marrow for a transplant. I’ve also had this procedure done to me, albeit in a lesser volume — it’s the same process used to perform bone marrow biopsies. I was awake for the procedure both times and received local (vs. general) anaesthetic. Needles are needles so there was discomfort, but it was very quick — like a hard pinch. Patients are sore for a few days afterwards, more so than PBSC, but recover quickly. Donors perform a full health scan before donating in the interests of their own well being as well as the patient, so if you’re not healthy enough to donate and recover, you will probably not be allowed to get to that point in the first place.

When donors join the registry they commit to donating to anyone in need, not just the person the drive is in honor of. So although a local drive may be in honor of Amit, the power of the awareness being raised by the publicity of his sickness is that there are people who have never heard of Amit Gupta that will have their lives saved by his efforts, perhaps even decades from now. I know that Amit is a very important person in the technical community, but please remember that everyone who needs a donor is the most important person in the world to somebody — a parent, a sibling, a child or a best friend. In that regard I believe that everyone who has someone in their life that they love more than themselves can empathize with what it must be like to be powerless to help that person in their time of greatest need.

Please consider joining the bone marrow registry. It truly is the opportunity to save someone’s life.

This single post will be such an incredible resource.  There’s a wealth of honest uncertainty that I can use to make Cheekswab’s site even better.  And HackerNews is not a niche site by any means; it’s very, very popular and frequented by a lot of people in high places.  The publicity generated for bone marrow donation here is a huge deal.

I’m excited.  This is something that can be changed in our lifetimes.

One thought on “Amit Gupta”