About a month ago a friend from the University of Virginia sent me an email entitled “awesome news.” It turns out that one of her friends who registered at the UVA bone marrow drive in January recently donated bone marrow to an unrelated patient at Georgetown Hospital! As this is the first new donor from a Cheekswab drive (that I know of) to be called to donate marrow, this was a huge deal. A few emails and a phone call later, I was introduced to Priscilla, a rising fourth year student at UVA who was willing to share her donation story.

Probably the most remarkable thing about talking to Priscilla was convincing her that her story was worth sharing in the first place. She was continually surprised that her marrow donation was a big deal at all. Because donating was such an obvious choice to her, she felt like she didn’t have much to say about her “decision” to do so. In her own words, “What decision? Why wouldn’t I do it?” I came to learn that it’s this kind of selflessness that characterizes Priscilla, in a nutshell.

But I reminded her that it’s not as easy a decision for many others, and that her experiences and thoughts as a college donor could really resonate with future donors who find themselves in similar circumstances. So without much further ado, I present Priscilla’s donation story.

(Mandatory disclaimer: As always these words reflect nothing but her own experiences, and with any medical procedure experiences may vary. But these words are 100% her own, with the exception of minor grammatical changes that were approved by Priscilla before publishing this post.) 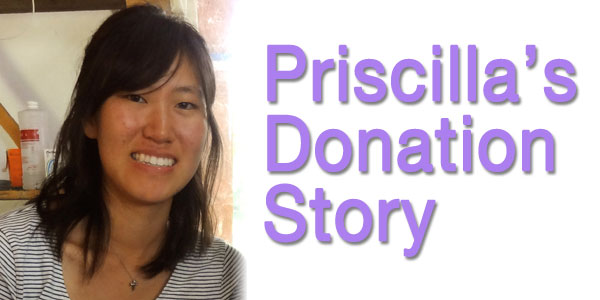 Can you please introduce yourself and why you’re writing this post?

My name is Priscilla, and I am a 21 year old Korean American and finishing up my last year at the University of Virginia. I am writing this post to share about my experience of being a bone marrow donor — I hope it’ll provide some insight to those who may be thinking about donating in the future and encourage those who are not yet on the registry to join!

Please walk us through the day when you donated.

I was initially called to donate through Peripheral Blood Stem Cell (PBSC), which is the most common way to donate your stem cells to your recipient. Through this method, I was required to go into the clinic every morning for five days to receive an injection with a drug called Filgrastim. They would take my vitals, ask about any symptoms that I had and then administer the shot. The first two days of the Filgrastim were generally painless, and it was only the last three days when I experienced some recurring pain in my lower back and hips. However, I realized that as long as I kept myself moving, the pain would disappear so it was something that was definitely manageable.

On the fifth day, I was ready to donate my stem cells through a process called apheresis. After my last dose of Filgrastim, they hooked me up to a collecting machine that separated my stem cells away from the rest of my blood. This process usually takes about 4-6 hours, however, the process was cut short for me because I had an allergic reaction to the sterilizing gas inside the machine. This is neither common nor was it specifically related to the PBSC process itself, but it left me unable to donate non-surgically. Instead, I was scheduled to surgically donate marrow two days later in order for me to donate my stem cells to the recipient on time.

The morning I was scheduled to donate marrow, I was met by a representative from the hospital at 7 AM in my hotel lobby. I was then escorted to a room where I met the surgeon and anesthesiologist. After filling out consent forms and doing additional testing, I was given a relaxant and within a few minutes, I went to sleep. The next thing I remembered was waking up 2-3 hours later in the recovery room, with some soreness on my back. I had difficulty standing up without feeling nauseous and felt really weak from having low blood pressure, but I eventually gained some strength throughout the day just from rest and getting extra IV fluids.

The doctor met with me in the evening to discuss with me about how the surgery went. He told me that the bone marrow surgery was actually the fastest he had done in eight years since he finished in about 14 minutes, only needing to take about half of the marrow that they were expecting to take since my marrow was so concentrated with stem cells. He also told me at that time that I was actually a 99% match to my recipient and because of that, the marrow transplant that would occur the next day, would most likely go smoothly without any risk for graft-versus-host disease. I was very thankful for that and he just discussed my current condition and how to take proper care of myself after leaving the hospital. I stayed overnight, took a shower in the morning to get the bandage off my back, and then was discharged.

How did your family react to your decision to donate?

They didn’t think much of it at first when I got the initial phone call just because my dad had also received a similar call a few years ago. But following further testing, he didn’t turn out to be the most suitable match. However, after I was confirmed as a match and I informed my parents of my decision to donate, they did get a little concerned, but I think they respected my decision.

Were you worried about something going wrong?

Not initially, especially since there is not much risk associated with PBSC. However, I did get a little anxious about the surgical donation due to the general anesthesia, but other than that, I did not think too much about risky possibilities.

What exactly was the procedure that was performed?

Through the Peripheral Blood Stem Cell (PBSC) donation, you receive five days of injections of Filgrastim, a drug that stimulates production of stem cells in your marrow and helps to move it into your bloodstream. On the fifth day, they do a simple collection through a process called apheresis that takes approximately 4-6 hours (there are some clinics that separate the collection process into two consecutive days). Just as if you were donating platelets or plasma, they hook you up to a machine, where they stick a needle in both your arms, and begin to separate the stem cells from your blood—the blood goes out in one arm and gets returned back to you in the other. PBSC is still considered “research” due to the use of Filgrastim in the donor, so consent forms to participate are required to be signed before donating.

Surgically donating bone marrow is a procedure that simply requires a day to donate. The surgeons will normally give you general anesthesia that should wear off in about two hours. During those two hours, the surgeons will lay you on your stomach and make two small holes on the surface of your skin and about fifteen smaller holes on each the right and left side of your pelvic bone. They then insert a hollow needle with a syringe attached to draw out your marrow.

Did it hurt? What would you say to someone worried about the physical pain?

For PBSC donation, the only pain that I experienced was from the effects of the Filgrastim injections. It is different for everybody, but I experienced fatigue and pain in my lower spine and hips. However, like I said earlier, I realized that movement helped keep the pain dampened. Additionally, many apheresis clinics require a mandatory intake of Tylenol around the clock to help with the pain.

As for the bone marrow donation, the actual procedure does not hurt since it is under general anesthesia. It is only after the procedure where you may experience some pain. For me, the pain was not as bad as I thought it would be. The pain was initially moderate with some aches but after a few days, it was more of a discomfort than anything and it did not really hinder me from doing anything in particular.

If you are worried about the physical pain, I would say that in my experience, it does not hurt as much as people think. It is definitely tolerable and Be the Match and your doctors will make sure that you are as comfortable as possible, providing a narcotic and other pain relievers. I personally did not take any pain relievers and still felt as though the pain was not bad at all.

How long was the recovery process?

The recovery process was pretty quick. It took about two weeks to fully recover from any physical pain that I had in my back and about a month to get over fatigue and anemia for which I just needed to take iron pills for supplement. I think the hardest challenge in regards to recovery was getting around especially since I had to walk around my college campus every day. You will probably end up walking much slower than normal and get tired more quickly. There is also the inconvenience of not being able to hold and carry anything more than 20 lbs.

Would you donate again?

Yes, I would definitely donate again. The process is easy when compared to the consequences of not donating bone marrow to someone who needs it. It is unfortunate to hear that many people do not get to live out their full lives because they cannot find a donor in time although matches exist. Thus, more than “saving someone’s life,” I saw donating bone marrow as helping the recipient to avoid a possible deadly consequence of their disease, one that is truly avoidable and not necessarily an inevitable, normal outcome to their disease. In addition, Be the Match is really great at making sure you are comfortable and encounter the least amount of inconvenience during the process. Thus, you lose very little to donate and in return, the recipient gains a new life.

All things considered, what do you feel about what you’ve done?

To be honest, I don’t feel like what I’ve done is anything noteworthy. I believe that donating is the right thing to do, especially knowing that you would expect that if you or your loved one were in the position of needing bone marrow. We are all human beings, and I feel it is our duty to help each other out, especially when the stakes are so high.